As we venture further and further away from the year 2020 and that initial hit of a world pandemic, I just want to say thanks… to those of you who’ve hung around, bought my book, watched my comedy specials, and even more so shared my content with friends, and encouraged me along the way. It helps more than you know.

As I prepare for the year ahead, I have a lot of shows lined up. I’m excited to get back out there and I’ll soon be sharing a schedule where maybe I can see you live and in person! One thing I’ve always wanted to maintain no matter where I go or how far I get is my sense of self.

Last year I had the opportunity to film a project with the company A Kid’s Class About. For those who haven’t heard, AKCA a streaming platform designed for young kids to teens where they can discover careers, learn life skills and explore big ideas. The teachers break down challenging, empowering, and important topics in each class, begging the question: “Who do you want to be when you grow up?”

That’s such a loaded question for a young kid, and sometimes the younger you are, the easier it is to answer… the options seem limitless. I think though, as we get older, it gets tougher, to not only know what we want to do, but how we want to show up in the world

I had a chance to be one of the teachers for the platform, and while I am no expert on the topic, I was pretty excited to tackle… Authenticity. How abstract yet necessary to talk to kids about as they grow up in an ever changing world. And let’s be honest, authenticity is a topic for kids of ALL ages, even us grown up ones.

I may not know much, but I know as I pursue a life that involves entertaining people, I cling to these little things I know to be true about myself. I thought I’d share my “audition tape” here, as it came to be known, only because I originally didn’t know how to convey the importance of such an abstract idea, so I started by just sharing a little bit about myself.

Once we started the filming process, I was able to connect this idea of living authentically to how I approached learning how to surf, a beautiful and terrifying passion of mine. To find out more about A Kid’s Class About Living with Authenticity, watch the minute long trailer below, and visit https://app.akidsco.com/living-with-authenticity to view the syllabus and all the classes.

To anyone who is still hanging out here, or anyone new who may have come along in the process, this is me, the face and voice behind the words you’ll find here on this blog. I don’t tackle everything perfectly, but I try to show up and process as best (and as kindly) as I know how. I’m glad you’re here!

In honor of Mother’s Day, this Saturday we’re celebrating all the moms and mom figures in our lives!

I’m sitting back on this one and sharing the space with a few other women to be able to talk about the meaningful women in their lives. We know relationships with parents can be complicated, but they can also be so, so good. While there’s room for everyone’s story and what this day means to them (if anything), this little space in time is for celebrating the women who came through and did the best they could with what they had!

After braving the storms in Arkansas, we arrived in the sweet and peaceful arms of family in Tennessee… our last stop before South Carolina!

While still doing my best to document, I’m learning the value of setting the phone down and just being with the people you’re with. We’re tired, but we’re almost home!

When I was in fifth grade my little sister had her head bashed in by a gold club. I know, it sounds morbid, and it was but bear with me, the story ends well.

It was a Sunday afternoon. We had just finished lunch and prior to that we had just finished church. To this fifth grader, church was definitely something you wanted to finish so you could hurry up and get to lunch. Lunch was something you didn’t want to end because after lunch was nap. I never liked nap time, which strikes me as odd because now I couldn’t live life without one.

My parents told everyone to go to their rooms after lunch, my mom always said the same thing, “you don’t have to go to sleep, but you do have to be quiet.” Nap time was really more for my parents, they were smart to train us young for the Sunday afternoon nap. We always knew it was coming. “Whatever you decide to do for your time is fine so long as it’s quiet and it’s in your room.” The last thing I remember my mother saying before everyone departed the kitchen was “you are not allowed to go outside.”

I remember this because my two younger siblings (Bobby and Betsy) had decided this was exactly what they would do after mom and dad fell asleep. We all went to our rooms and they waited a little while before I heard them quietly sneaking back out. Bobby had a friend over that day and they decided to play with dad’s golf clubs. I find it important to note my dad has never been a golfer, still isn’t, but either because it was another hobby he tried to pick up and didn’t find entertaining (I don’t blame him, boring!) or someone gave them to him because people always randomly give things to their pastor (probably for good measure), we had golf clubs laying around.

Bobby and his friend Jamie each took turns swinging. Betsy was frolicking around the yard. I was peeking out of my window when I decided to go out and tell them I was going to tell mom and dad they were breaking the rules (yes, I made things my business that weren’t my business). Without paying much attention Betsy frolicked her way behind Jamie’s back hand swing when his 9 iron (that’s the big one for those of you who don’t play golf) smacked right into her forehead (which is the only reason I ever learned that was a 9 iron).

I wasn’t there right when it happened, I only heard Betsy screaming. I ran outside, Bobby and Jamie frozen dead in their tracks and Betsy holding her hands over her forehead. Because I didn’t see what happened, nor did I see any blood, I assumed Betsy was being dramatic, like a “Bobby pushed me” kind of cry. With there being four kids in my family we heard those a lot. “Don’t be such a baby,” I said to Betsy, “why are you crying?” I know, in retrospect I am not proud of how I approached the situation, but this was my first memorable lesson in never assuming you know everything.

Betsy couldn’t even speak, she just removed her hands from her forehead. For a split second I was silenced as a I experienced my first shock wave. Once the split second was up I screamed bloody murder for my mom and dad. I stood there, unable to move, looking at the inside of my little sister’s head. The hole was the actual size of the 9 iron. I remember thinking if she leaned forward her brains were going to fall out.

Mom and dad came running out of the house and to be honest, the rest is a blur. I remember them wrapping her in a blanket and rushing her to the hospital, but that’s it. She was in the hospital for a while, in part because the first time she was stitched up they failed to clean it out first so she was rushed to another hospital (with more credentials) to re-open her head, clean it out and sew it back up. She stayed on the children’s ward of the hospital for a long time. I remember all the toys and flowers that flooded her room. Truth be told, I remember being jealous, even almost wishing it had been me.

Maybe that’s a normal feeling for a kid, especially a middle child, when they see one of their siblings get all the attention (even if for unfortunate reasons), or maybe I was just that selfish from the get-go since my first word was “mine.” Either way, I was glad Betsy was okay, but I was tempted to remind everyone that she didn’t listen to mom about nap time.

I don’t know why I’ve always been worried there wasn’t enough love to go around, as if people were going to run dry if they gave it all to Betsy. I don’t know why I’ve always been more concerned about how I was going to be okay more so than other people. I don’t like this quality about myself, but it’s there, and I can’t change it if I don’t address it.

I’ve come a long way from the fifth grade girl who wanted to tattle on her sister who just had her head bashed in, but I still fall short in my efforts to look out for my own self.

I think it’s important to stand up for what’s right and have an opinion and voice an injustice (like say breaking certain rules), but I find it just as important, if not more so, to cater to the person who is hurting, to offer love and support and grace (even if rules were broken). People are really good at getting behind causes and campaigns, especially ones that draw attention, but I think people (myself included) fall short in the day to day individual ways they can offer love and extend grace to the very people in front of them.

To my fifth grade self and any other child or grown up kid out there, I just thought you might like to know there is plenty of love to go around, if only we’d be willing to extend it- no matter what, even if you don’t get it back the way you want it. You become a person of love when you practice love. And believe me, love takes practice.

As for Betsy, I love you sis, I always have, I just never expressed it very well. Little did I know how much more jealous I would be one day when Harry Potter made his debut into the world and the two of you shared the same scar. I don’t know if I ever said it then so I’ll say it now, I’m really glad you’re okay. 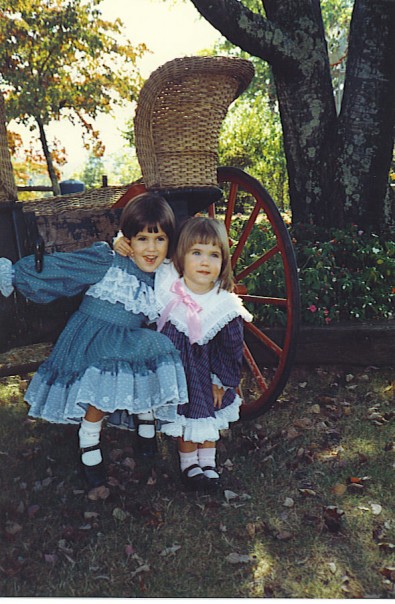