I had taken a couple of high schools girls to Encinitas, my favorite beachside town, to get smoothies and talk about whatever might come our way. It’s a longer than necessary drive to get smoothies, but the drive is a sight unlike any other along the California coastline, and I look for any excuse to take a road trip; an affection for the road is something I’d like to pass on to my high school girls. 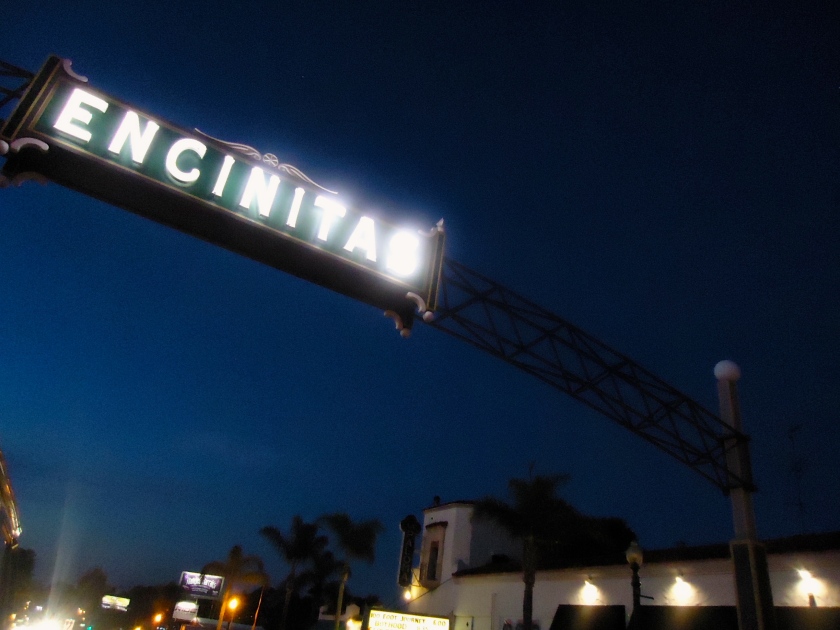 We parked on an incline and I noticed my emergency break giving a little, but I assumed once we removed our extra weight from the van it would be fine. That is to say, I noticed a problem… my van was moving when it shouldn’t have been… and I ignored it.

The girls and I sat outside of a cafe across the street, and in between snacking and laughing I looked up and noticed a van that looked just like mine, pulling out of the same parking lot I parked in. It took me the length of time it takes to read “God Bless Johnny Cash” on the back of the similar looking green and tan Volkswagen Vanagon before I felt my heart drop into my stomach, realizing that it was my van pulling out of the parking lot… and I was not in it. I barely had enough time to ask myself who was driving my van when it dawned on me… no one was driving my van. My van had gone rogue. 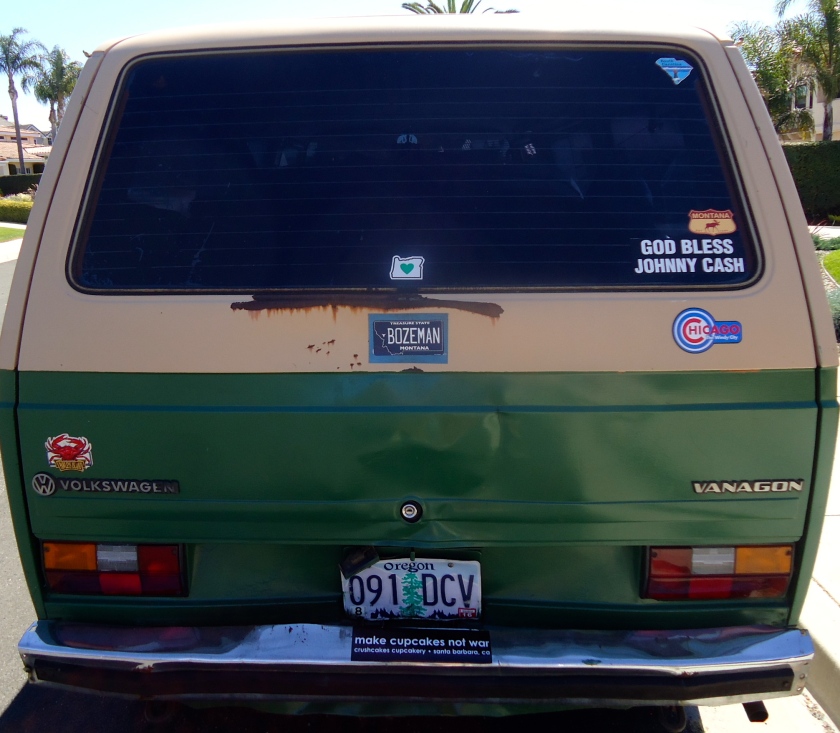 I jumped up as if a fire had been lit underneath me and screamed, “OH MY GOD, that’s MY CAR, I’M NOT IN IT, IT’S ROLLING! MY VAN IS ROLLING!” Thank the Lord above my van rolled onto the highway at a time when there were no cars present, and those that approached shortly after her right lane arrival had time to get over and drive around her (yes, my van is a girl). She stopped with her back end sitting in the far right lane of the highway… which is to say, my bedroom was sitting on the far right lane of Pacific Coast Highway in Encinitas, California. 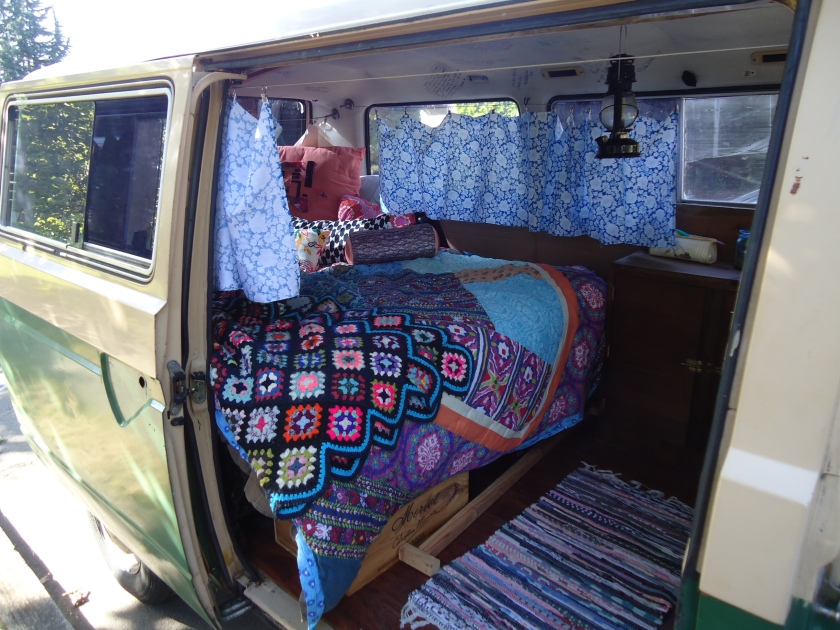 “My house! Oh God, my house! Please don’t hit my house!” I said to myself, as well as passing cars, as well as Jesus, “Dear God, please,” I prayed and panicked, realizing I might have sounded crazy to anyone walking past or watching as I yelled about my house being hit by traffic. There was a florist outside with a bouquet in her hands and I could hear her yelling, “there’s no one in that car! Who’s driving that thing?” I made it across to the other side of the highway and as fast as I could, unlocked my house, jumped inside and cranked it up. I pulled back into the parking lot, on a very flat surface, put her in park and turned to look at the cafe where the girls sat on the other side of the street, laughing in disbelief, along with anyone else who was sitting outside, including the cook standing in the doorway of the restaurant next door.

Jesus nodded, as Jesus always does, as if to say, “you’re welcome, kiddo”… 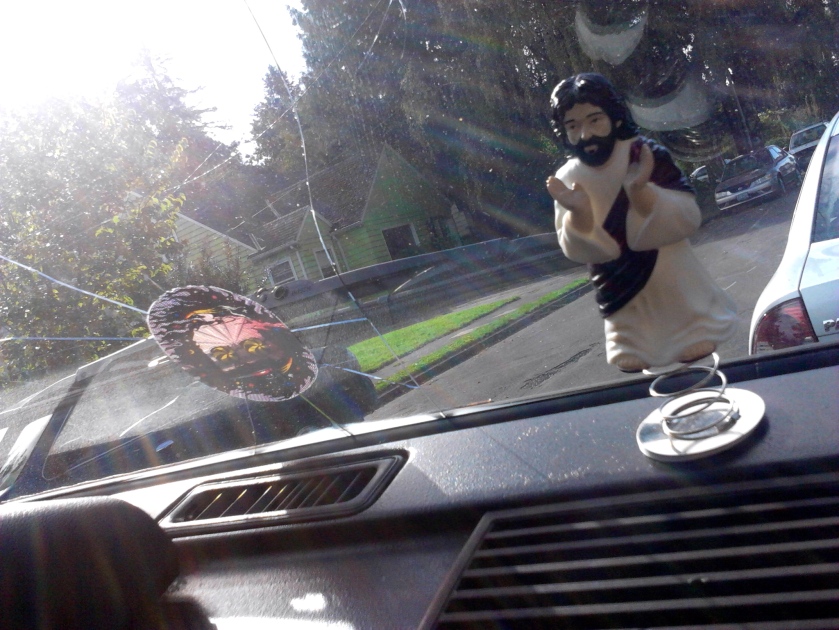 After catching my breath and saying my prayers, the finger-pointing began… “Reggie June!” I scolded my van quietly, “you could have killed somebody!” Yes, my van is appropriately named Reggie June. She’s named after one of my favorite football players of all time, Reggie White, and one of my favorite ladies of all time, June Carter Cash. Reggie June is a tomboy with a sweet and sassy personality who isn’t afraid to get down in the trenches… and apparently play in traffic. And even though she’s painted green and named after a former Green Bay Packer, she’s a straight up Chicago Bears fan… 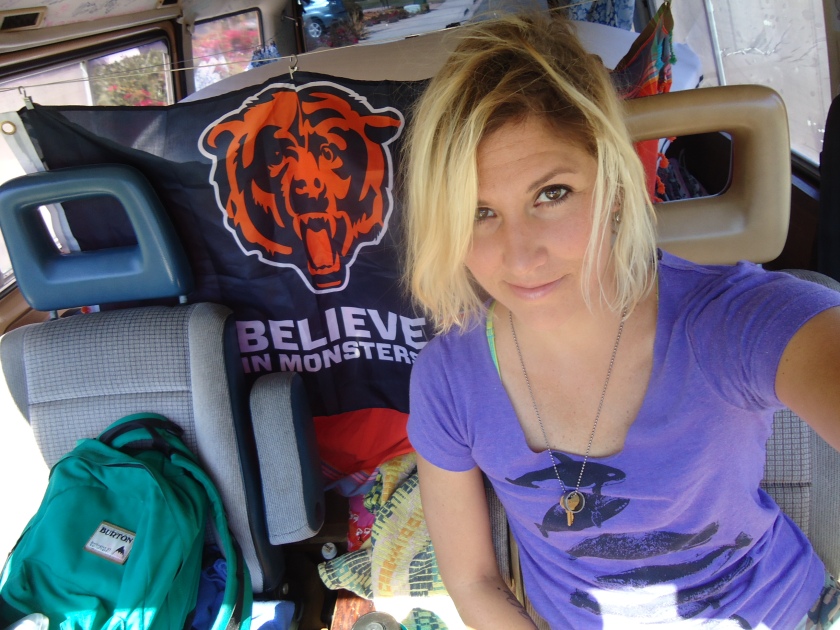 I scolded Reggie quietly because even though it was she who rolled out onto the right lane of Pacific Coast Highway, I knew that it was mostly (if not all) my fault.

It was mostly (if not all) my fault because I noticed a potential problem and I ignored it. I even commented “that makes me a little nervous” when I first set the emergency brake and it started to give way. But instead of addressing what made me nervous, I walked away from it, as if it was going to fix itself. I said “oh well,” instead of taking a little bit longer to park somewhere else a little more stable, a little more flat. To save time, I settled for the possibly of disaster instead of taking longer to find a safe place and a little more stability.

I still can’t shake the sight of sitting on the other side of the street, watching Reggie roll out of her designated parking spot; and if she wasn’t yelling “FREEDOM!,” she was definitely yelling, “I TOLD YOU, I TOLD YOU!!!” I was horrified, as I’m sure Reggie was, having her rear-end exposed to oncoming traffic. Reggie was in a vulnerable spot, and yet I got mad at her for backing out of the parking spot I tried to force her to park in, even though she gave me a fair warning that she wasn’t safe there.

As I watched bobble-head Jesus have a dance party on my dashboard for saving the day, as well as the lives of many (in more than ways than one), I couldn’t help but think about how often I have played that scenario out in other areas of life. How many times have I noticed a problem, or even just a potential problem, and instead of expending the time and energy it takes to fix it, or the very least address it, I’ve either said “oh well,” and ignored it as if I didn’t care, or said “ahhhh, it’ll be fine,” in complete denial that a problem even exists. How many times have I seen a problem, walked the other way and then blamed the problem for becoming a bigger problem?

What’s worse, how many times have I done that with people?

As I scolded Reggie June under my breath, I knew I was scolding her quietly because she didn’t actually deserve to be scolded at all. As long as I could scold her, I didn’t have to own my stupidity in the situation. Scolding her was a form of blame shifting, and since I felt stupid for ignoring the problem, blaming anything other than myself made me feel a little bit better about not being smarter. But let’s face it, feeling better about myself for a moment wasn’t going to fix the problem in the long run. And in the same way ignorance and denial will never solve a problem, conflict will never get resolved if you are attempting to save face by not owning your stuff (in my case, stupidity… or carelessness, if we’re avoiding the S-word) in the situation.

You cannot seek to feel better about yourself as an end result of conflict and expect to find resolve, especially if you care about the person you are in conflict with and you want them to feel cared for.

Feeling less stupid isn’t going to prevent what happened with Reggie from happening again. Not even blaming Reggie for having a defective emergency brake is going to prevent a potential bumper to bedroom disaster from happening again. Addressing the defective emergency brake is what is going to prevent it from happening again, that is to say, addressing the problem. And if I’m honest, nothing within me wants to address the problem. I just want it to work… without the effort. So much time and energy and prayer and money has already gone into Reggie that I don’t want there to be any more work to be done. And even though I wrote about the importance of maintenance in previous posts, I want to erase them all and ignore the problem, because it’s easier, and cheaper… now. But not later.

While it might be frustrating to have to keep working at keeping Reggie in good health, it’s a lot less frustrating than Reggie’s health giving out completely as she spirals backwards into oncoming traffic and my mode of transportation/house/office space is no more. I’d rather it be frustrating now than devastating later… I’d rather buy a new emergency brake than buy a new Reggie. 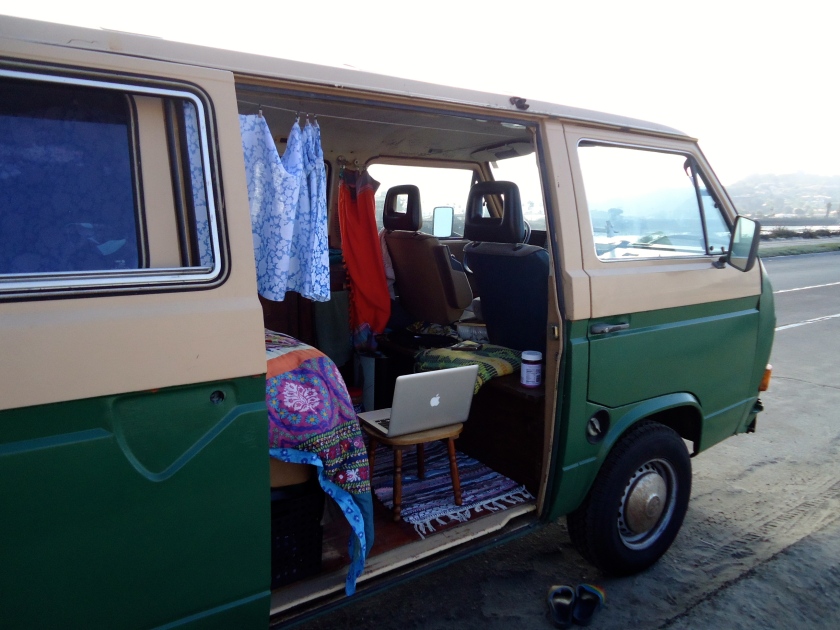 And so it is with people, with relationships, with communication, with conflict. It’s so much easier to not work at it, to not try harder, to not fight (if need be), to say “never mind,” “oh well,” “it’ll be fine.” But avoiding conflict is not resolving conflict, and not fighting for the sake of not fighting is still fighting, just with less words, which is what you’re going to need if you want to find resolve, not just the state of not fighting. 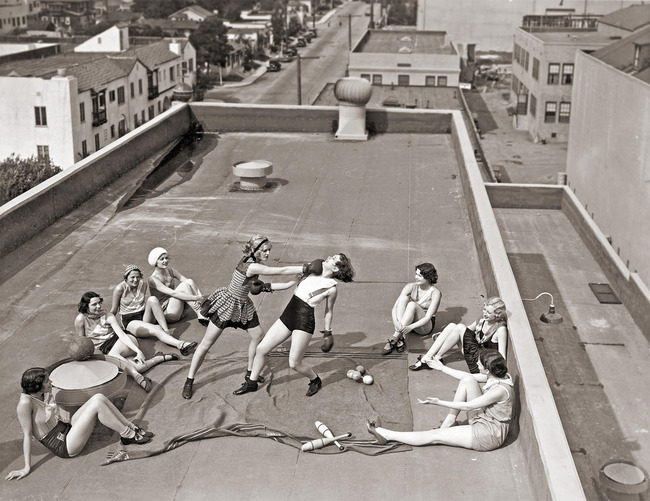 Reggie’s a big girl, and she’s thirty years old, which is young in human years but pretty up there in car years, so she’s pretty slow. Perhaps this is another reason God has paired Reggie June and I up, He’s gifted me with the opportunity to do all the moving I want, while slowing down enough to realize that I need, I want, to be still.

That might sound like a contradiction seeing as how I also just stated that I wanted to be able to fight… and I do, well, I don’t really want to fight, but sort of I do. I want to not be afraid of fighting so that I won’t run out on the people I’m avoiding a fight with. For as much as I want relationships to be easy, I want to be even more to be willing to work at them. 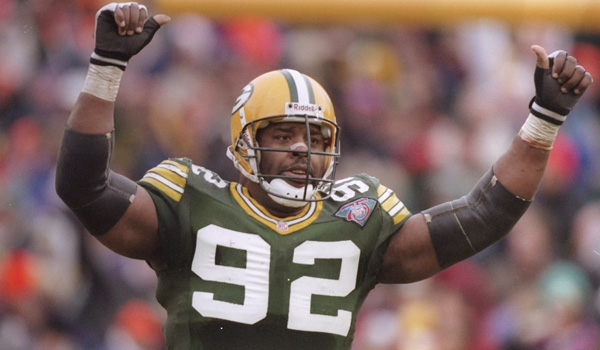 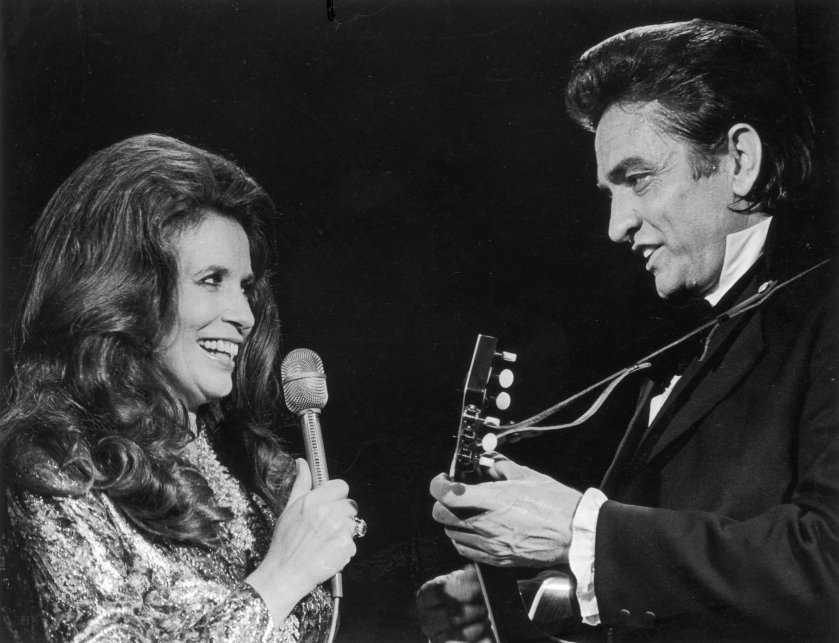 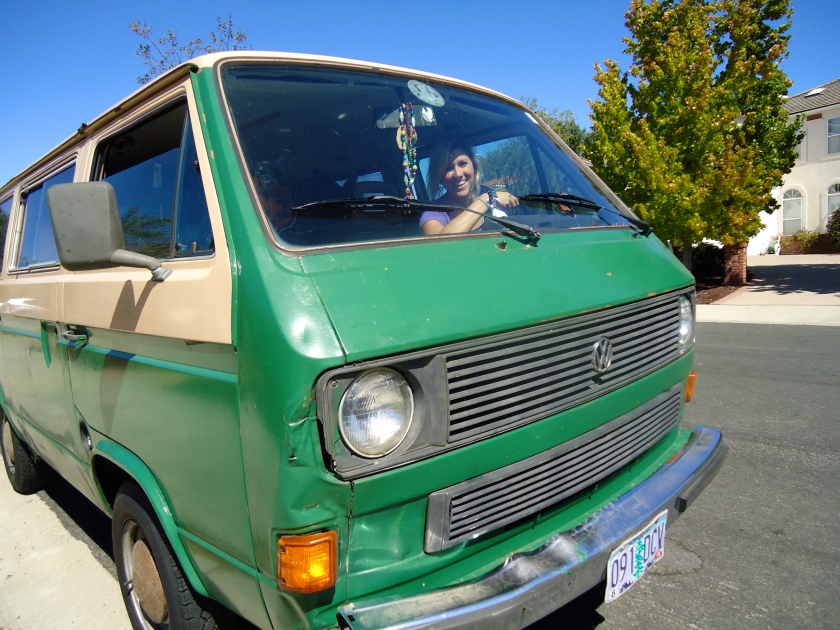